A few months ago we came across a fare sale from Boston Logan to London Heathrow with round trip World Traveller Plus+ (premium economy) for $835. With rates routinely running $2,000 round trip for premium economy we decided to jump on this offer to check out the new British Airways premium economy product aboard their A380. We were also thinking we would use some AAdvantage miles and upgrade ourselves to Club World (business class) one way to see how this product compares to the new American Airlines business class since we had read about how you can upgrade using AA miles on British Airways. Well.. this is true, but I would be hard pressed to find a reason as to why someone would actually do this. More to follow.

“Use your AAdvantage miles to upgrade on American Airlines, British Airways and Iberia flights* for yourself or anyone you designate.

Upgrades are valid to the next cabin of service and are valid for a single one-way trip with a maximum of three segments. Upgrades are subject to capacity controls. Excluding award tickets, the following eligible fare types can be upgraded:

Upgrades from economy are very clear here, it states “Full-Fare” directly on the website so there should be no surprises when you can’t upgrade a discounted economy ticket. However, with this being said it is still disappointing since economy can only be upgraded to premium economy and a full-fare economy ticket will almost always be more expense than buying premium economy outright.

Then as you can see above, for upgrades from premium economy there is no noted stipulation of “Full-Fare“, so naturally we figured this would be a great opportunity to upgrade to Club World one way.

Our American Airlines receipt noted our flight was ticketed and booked in Premium Economy. We then looked to see our fare class and it was noted with a Booking Code of W. Naturally, we were excited to call in and request upgrade availability on our flight for only 12,500 AA miles.

With booking confirmation in hand I called the AAdvantage Platinum rewards desk and explained to the agent the trip I had booked before telling him I wanted to upgrade one segment. I told him I booked in Premium Economy through American Airlines on British Airways and my receipt noted I was in fare class W. He then went on to tell me there was availability for upgrades on this flight but that I didn’t have the proper fare class and that I probably didn’t want to pay the difference.

Just to humor myself I asked him what the cost would be and he said I would need to pay over $4,000 more just to get full-fare premium economy. I thought this was ABSURD, pay an additional $4,000 to have the same exact seat I already have. Then I could use 12,500 miles to confirm my seat in business class IF it’s still available.

Out of curiosity I looked up what it would cost to book business class round trip on the exact dates I am going. Below was the result of my search with both legs on the A380. 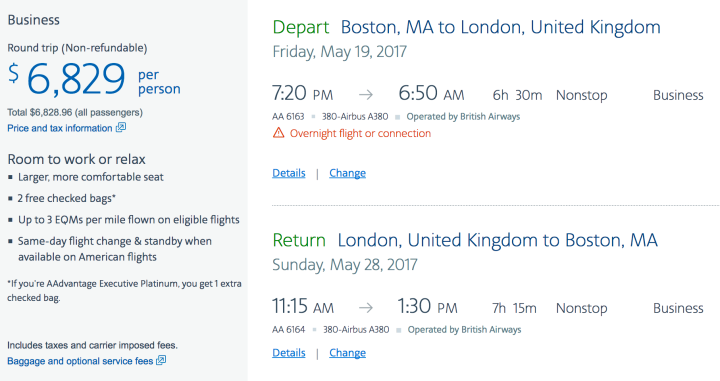 So for what would have ended up costing me around $5,000 I could have secured myself one way in business (based on upgrade availability) and one way in premium economy. Or for $6,829 I could fly round trip business class and receive all of the additional perks such as more Elite Qualifying miles, more Elite Qualifying Dollars, and additional bonus miles. I’m not at all saying I would pay this price, but if I were for some reason willing to then it would be a no brainer to instead purchase the business class airfare and not a full-fare premium economy seat.

Needless to say I politely turned him down, to which he chuckled a little and said, “yep, I have yet to have someone call in and agree to that offer”. Then he went on to explain to me how it works. 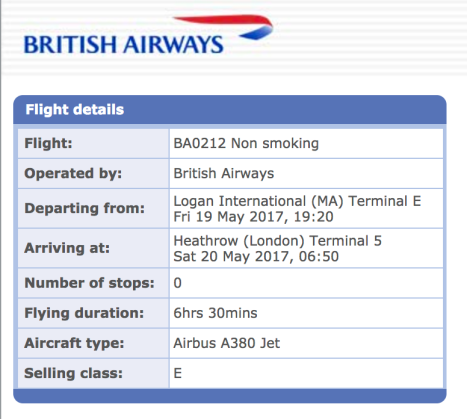 The additional $4,000 was what British Airways had in their system as the cost of moving from fare class E in premium economy to fare class W in premium economy. Now that I know this I won’t make the mistake again of calling in and trying to upgrade unless I look here and somehow got lucky enough to end up with a ticket booked in “W”.

While I now understand what the phrase, “Premium Economy with published World Traveller Plus fares booked in W on British Airways”, means, I still think the wording could use better clarification. I also struggle to understand the major advantage of this perk since you have to spend the same amount or more than a business class ticket on the same flight. The only thing I can think of would be someone whose business won’t allow them to book business class but need fully refundable flights for logistical reasons. However, for anyone else this co-shared perk is pretty much worthless and if you want to try upgrading your flight using miles then it would be best to book through the airline you are flying on. The co-shared perk is still great and it offers many advantages for a Oneworld airline flyer but in my opinion this is one of them that falls disappointingly short. Has anyone else run into any issues when trying to upgrade their co-shared flight booked on British Airways?

2 thoughts on “Upgrading a British Airways/American Airlines Codeshare: Not a great option”